Creative design made with love

Creative design made with love

"I am dealing with the contemporary man, who is the most restless being that has ever evolved on the earth. But people do become silent; you just have to allow them to throw out their madness, insanity, then they themselves become silent."

During these 7 days you will combine your love of the OSHO No Mind Meditative Therapy with the skills of being a facilitator.
As you learn more about the meditation and how it works, you deepen your connection with the process and at the same time qualify to facilitate it.
You may decide to participate simply to expand your own experience of meditation through this revolutionary process and it is an ideal training if you’re already a facilitator or want to become one.

Programme
Each day starts with the OSHO No Mind Meditative Therapy. Then, after a break, the training proceeds for 2 more hours.
The OSHO No Mind starts with one hour of ‘gibberish’ (a ‘language’ you don’t know!) followed by one hour of silent sitting. In the first hour, gibberish is a powerful tool to empty the mind of all garbage, allowing a more profound silence to arise in the second hour.

Background
Meditative Therapies were created by Osho, who designed them scientifically for the modern man. They represent a breakthrough in meditation, a way of speeding up the process of connecting with your natural state of being.
Meditative Therapies are processes for freeing up the energy, renewing vitality and creating the space for silence. The therapies work energetically, bypassing the conscious, analytical mind. They are therefore clear, pure processes in which you connect directly with your own energy.
All stages are a combination of meditation and therapy: meditation, as it is a moment-to-moment encounter with yourself; and therapy, as you break through your conditioning by bypassing the analytical mind.

Talking about it Osho says, “Gibberish is one of the most scientific ways to clean your mind”. read more ...

And also: “Just a time to throw everything, without inhibition. These creatures that you throw out are eating your head continuously, destroying your intelligence. Catch them and throw them out...”

“To use gibberish, don't say things which are meaningful, don't use the language that you know. Use Chinese, if you don't know Chinese. Use Japanese if you don't know Japanese. Don't use German if you know German. For the first time have a freedom - the same as all the birds have. Simply allow whatever comes to your mind without bothering about its rationality, reasonability, meaning, significance - just the way the birds are doing. For the first part, leave language and mind aside.”

“The word 'gibberish' comes from a Sufi mystic, Jabbar. Jabbar never spoke any language, he just uttered nonsense. Still he had thousands of disciples because what he was saying was, «Your mind is nothing but gibberish. Put it aside and you will have a taste of your own being.”

"The second part is the great silence rises after being totally in the Gibberish. You only need to close your eyes and allow you your body to freeze, all its movements to stop gathering your energy within yourself. Remaining here and now."

“You are a separate force which comes from the center, and the center is joined with eternity. It knows no birth, no death. This buddha is your ultimate potential, the very Everest of consciousness. Great is the splendor of this moment.” 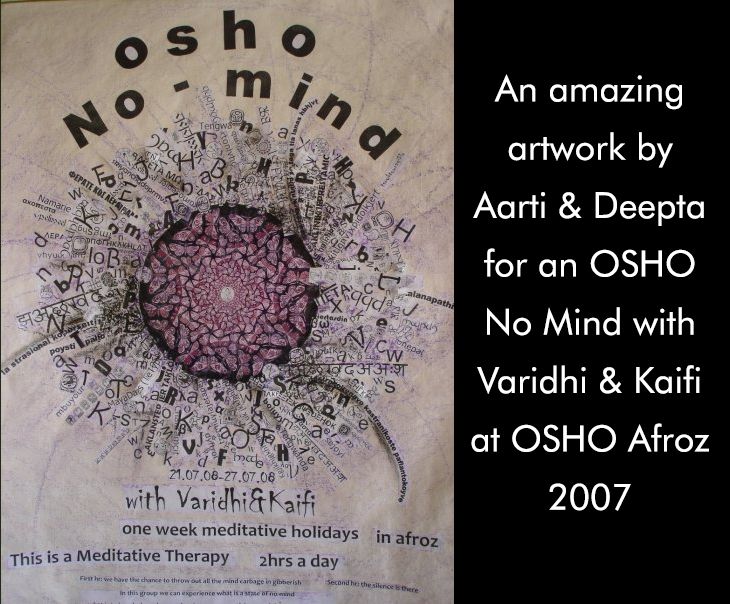 No-Mind is an OSHO Meditative Therapy

From Separation to Unity Copyright © 2022
We use cookies on our website to give you the most relevant experience by remembering your preferences and repeat visits. By clicking “Accept All”, you consent to the use of ALL the cookies. However, you may visit "Cookie Settings" to provide a controlled consent.
Cookie SettingsAccept All
Manage consent

This website uses cookies to improve your experience while you navigate through the website. Out of these, the cookies that are categorized as necessary are stored on your browser as they are essential for the working of basic functionalities of the website. We also use third-party cookies that help us analyze and understand how you use this website. These cookies will be stored in your browser only with your consent. You also have the option to opt-out of these cookies. But opting out of some of these cookies may affect your browsing experience.
Necessary Always Enabled
Necessary cookies are absolutely essential for the website to function properly. These cookies ensure basic functionalities and security features of the website, anonymously.
Functional
Functional cookies help to perform certain functionalities like sharing the content of the website on social media platforms, collect feedbacks, and other third-party features.
Performance
Performance cookies are used to understand and analyze the key performance indexes of the website which helps in delivering a better user experience for the visitors.
Analytics
Analytical cookies are used to understand how visitors interact with the website. These cookies help provide information on metrics the number of visitors, bounce rate, traffic source, etc.
Advertisement
Advertisement cookies are used to provide visitors with relevant ads and marketing campaigns. These cookies track visitors across websites and collect information to provide customized ads.
Others
Other uncategorized cookies are those that are being analyzed and have not been classified into a category as yet.
SAVE & ACCEPT